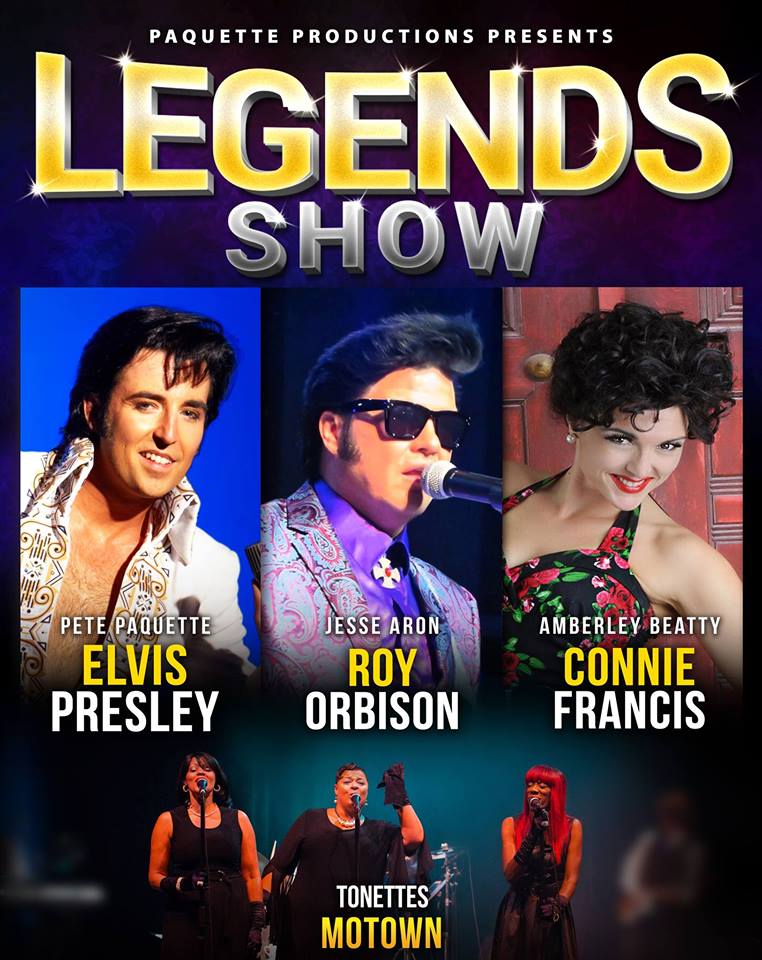 Legends Show brings you some of the world’s most exciting performers live on stage. Accompanied by the “Rockin’ Royals Band”, this show will feature the most incredible Tributes to Roy Orbison, Connie Francis, Elvis Presley, and Motown by the sensational “Tonettes.”

Performing as Roy Orbison, Jesse Aron, who hails from the State of Wisconsin, is recognized as one of USA’s top Roy Orbison Tribute performers. With his effortless voice and uncanny resemblance to Roy, his portrayal to ‘The Big O’ will leave you mesmerized. Jesse will take you back in time with such hits as ‘Crying’, ‘Pretty Woman’, ‘Only The Lonely’, ‘Running Scared’, and many more of your favourites.

Canada’s Tribute Queen Amberley Beatty, returns to the stage with an incredible performance paying tribute to American Pop Singing Icon, the late Connie Francis. Idolized by millions of fans around the world, Francis was best known for her hits such as ’Where the Boys Are’, ‘Whose Sorry Now’, ‘You’re Cheatin’ Heart’, ‘Stupid Cupid’, Lipstick on Your Collar’.

The Tonettes: Cathy, Marlene and Amoy as you have never seen them before, have been blessed with power, sensitivity, and vocal energy. This sensational trio will be performing a variety of songs dedicated to the great 50s and 60s musical eras. This special performance is one rarely seen by this amazing

Pete Paquette is a World-class Elvis Tribute Artist that is in great demand and is highly regarded as one of the top Elvis performers in the business today. Known for captivating his audiences through his incredible voice, high energy, charisma, and playful spontaneity with his audiences, this multi-award winning performer will leave you wanting more.